From many cities in Europe there are direct flights to the John Paul II International Airport Krakow. They include Amsterdam, Berlin, Brussel, Copenhagen, Frankfurt, Hamburg, London, Madrid, Munich, Oslo, Paris, Rome, Stocholm, Vienna, Zurich. From other cities Krakow can be reached conveniently with a stop in Warsaw, Fraknfurt, Munich, Vienna or Zurich. In some cases the best option can be to fly to Katowice airport, from which Krakow can be reached by a bus in two hours.

From the airport to the city

The Krakow airport is only about 12 km from the city centre (10 km from the Institute of Nuclear Physics). The transportation options include a taxi, a train or a bus:

From the city centre to the Institute

The taxi from the city centre to the Institute should cost about 20 PLN.

If you want to use the public transport, the easiest way to reach the Institute from the old town in Krakow  is to take a tram which goes in the direction Bronowice Małe (4, 8, 24). All of these lines join at Teatr Bagatela, but stop in different places before the crossing.  From the tram you need to leave at Balicka Wiadukt stop and then walk 700 m to the Institute along the street heading north under the railway bridges. The travel time is 15-20 minutes, the cheapest ticket (20-minutes 2.80 PLN) should be sufficient. 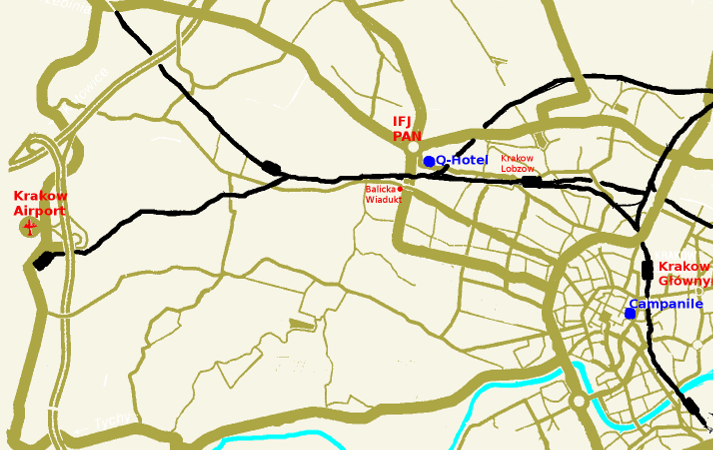 The exchange rate for the Polish zloty (PLN) is about 0.23 EUR, 0.26 USD, 0.25 CHF, 0.20 GBP (25 August 2016). You may change your cash in the offices called Kantor and some banks or withdraw cash from many money machines. However, in most places you may pay with a credit card (Visa or Mastercard) - even in a taxi - so you probably do not need a lot of cash.

The rates are best in exchange offices in the city centre, but a few of them offer seemingly excelent rates which in fact are very bad (for example in place of typical  3.82 PLN for 1 USD they write 3,o95 PLN).